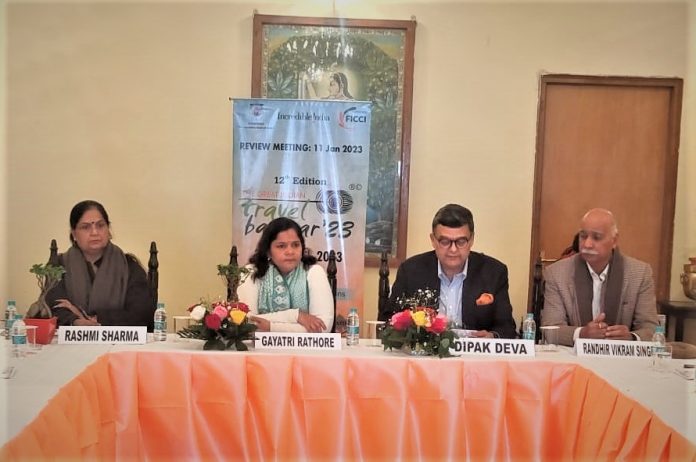 Gayatri Rathod (IAS), Principal Secretary, Tourism Department, Rajasthan announced the 12th edition of Great Indian Travel Bazaar (GITB) that will commence from April 23rd to 25th, 2023 under the joint aegis of Rajasthan Tourism Department, Ministry of Tourism and Federation of Indian Chambers of Commerce (FICCI). GITB will be inaugurated on April 23rd, while exhibition and B2B meetings will commence from April 24th and continue till 25th April at the Jaipur Exhibition and Convention Centre (JECC Campus), Sitapura, Jaipur.

A preview meeting was organized on Wednesday, the 11th of January at ‘Khasa Kothi’ premises. In the presence of Gayatri Rathod and the Director of the Department, Dr. Rashmi Sharma (IAS), an in-depth discussion was held between the officers of the Tourism Department and officials from FICCI regarding the framework of the programme.

Speaking on the occasion, Gayatri Rathod (IAS) said, “All the foreign delegates participating in GITB would be brought from Delhi to Jaipur by the ‘Palace on Wheels’. The year 2023 has been declared by the United Nations as the International Year of Millet, and as such a series of millet food products along with Rajasthan’s traditional food will be made available for the foreign delegates during the inaugural session of GITB”.

FICCI President, Deepak Deva, present during the meeting mentioned, “More than 230 delegates will be participating at the 12th edition of GITB this year and the number is likely to increase further by mid of April. Foreign delegates from several countries including Australia, Germany, France, and Spain will be part of the event.”